The Internal Revenue Service (IRS) on Wednesday August 19th 2021 hosted a forum dedicated to tax policy for marijuana businesses and cryptocurrency. Aimed at tax professionals interested in learning about the crypto and cannabis spaces, provided a high-level overview of some of the financial issues that are unique to the marijuana industry under the umbrella of federal prohibition.

They talked about allowable tax deductions while cannabis remains federally illegal and how different states approach taxing marijuana. It also covered issues related to paying taxes on earnings in Bitcoin and other forms of digital currency & about the growing public support for cannabis legalization and the prospects of federal reform which is reaching all time highs. While the vast majority of states have legalized cannabis in some form, its illicit status under the Controlled Substances Act means that marijuana businesses can not deduct standard expenses like in other traditional markets under a provision known as 280E, the presenter explained. He emphasized, however, that even if the business activity is considered illegal, cannabis companies must still pay federal taxes. And he pointed out that there is an opportunity for limited deductions when it comes to reporting the cost of goods for retailers and producers. 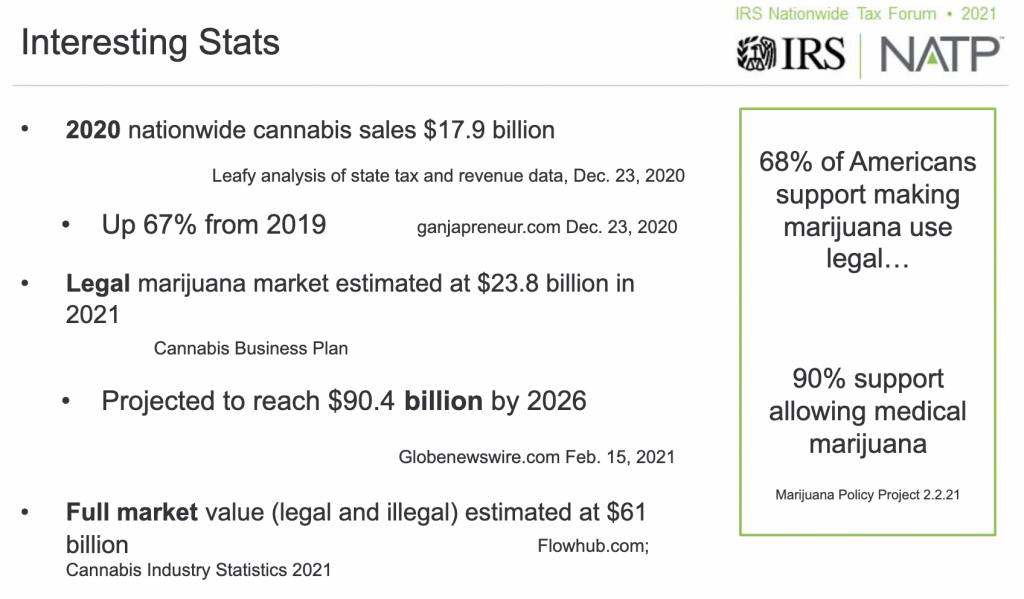 Senate Majority Leader Chuck Schumer (D-NY) lead a legalization legislation which a draft was put together in July 2021. “I think this is a very active item—and in doing so, I believe that is becoming more and more mainstream,” he said. “Right now, if we get legislation to regulate—the question is if they’re going to legalize it—then my presentation next year will be very different.”

Former Treasury Secretary Steven Mnuchin said in 2019 that he’d like to see  legislation handling the cannabis banking issue and he pointed out that  IRS Has had to build Large Cash Rooms for these type of businesses due to the Cash businesses they operate some pay taxes in cash.

IRS released updated guidance on tax policy for the marijuana industry last year, including instructions on how cannabis businesses that don’t have access to bank accounts can pay their tax bills using large amounts of cash. This is gigantic for the Cannabis industry to not only get bank accounts but also to have American Cannabis companies listed publicly on the Nasdaq Stock Exchanges and receive investment worldwide into developing the cannabis industry of the future.